Mikko, a Bichon Frise, was my Mother’s Day and Birthday gift combined from my girls and partly from my savings account. He had adapted well, sleeping for 5 hours and waking up to make his daily trip to the bathroom and back to bed. After we came back from our trip at the beginning of August everything went…terrible… Mikko found the power of barking, crying and howling all at once, and only during the night.

We tried everything, from tiring him out before going to bed, to giving him the calming chews the vet suggested and  “ignoring the cries.” Nothing had worked. So what are we to do with a demanding puppy and sleepless nights the week before our teaching days start? Well…. Keep on trying, and that includes new things, yet staying consistent with the hours and the routine.

Like every newborn baby, raising and training a puppy takes a lot of patience. They are all different, and create different attachments. Mikko seemed to attach himself rightaway to my 3 year old Serenity, a maltichon. Eventually it may become a healthy one, but as of now, poor Serenity has to deal with a now 5 month old shadow. Apparently she doesn’t remember all the pain and annoying months she gave Darly. Luckily for Darly, she is an outside dog, so we could often rescue her from Serenity’s puppy months. Yes, Mikko is persistent and learns fast, except when it comes to bed, bathroom areas and annoying his “elder.”

Serenity when she was a puppy 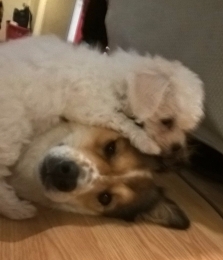 Darly, 6 years old. The babysitter of all puppies 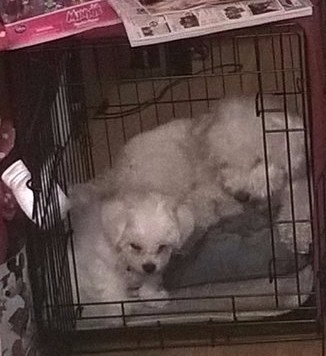 Patience, persistence and consistence eventually paid off just before we started our substitute teaching jobs and has continued for 4 more nights. Of course we had at this point, implemented the (what I call) “far, far away” strategy which is: the more he cries the further his bed gets from us, then backwards as he stops crying. Either that or my brain was too tired and could not hear him anymore. He eventually got rewarded after by having his bed in our bedroom right after he slept through a few nights and only waking up once to go to the bathroom.  That was the end of 3 agonizing weeks. When he saw that he could be in the same room after being good, he was satisfied and that marked the end of the crying, howling, whimpering nights. It has now been 2 weeks of pleasant sleep. Now that he can peacefully rest knowing that we are still around, the household can follow suit as well. It is a battle of patience, persistence and HOPE. Hoping that eventually things will turn out the way they should. Even a puppy can learn and adapt to the changes around him.

We learn the importance of being patient, even with a warm cuddle ball who is not even 5 pounds. We understand his needs, his fears of not knowing where the family is, or just not wanting to be separated. I’m no dog whisperer, but I know that one has to be patient with a puppy when it comes to training him/her. Sleeping through the night, potty training, teaching him/her the off limit areas and more, takes a lot of patience. Training your pup doesn’t happen in 2, 3 or sometimes, 4 months. You have to constantly watch the pup, at least share that “constantly” with others, when housetraining. Sometimes we have to learn that patience also means making a few changes for the sake of a puppy (and yes, especially a baby). I had to roll up my living room rug while the puppy potty trains. Small sacrifices like that are just temporary when training a pup. 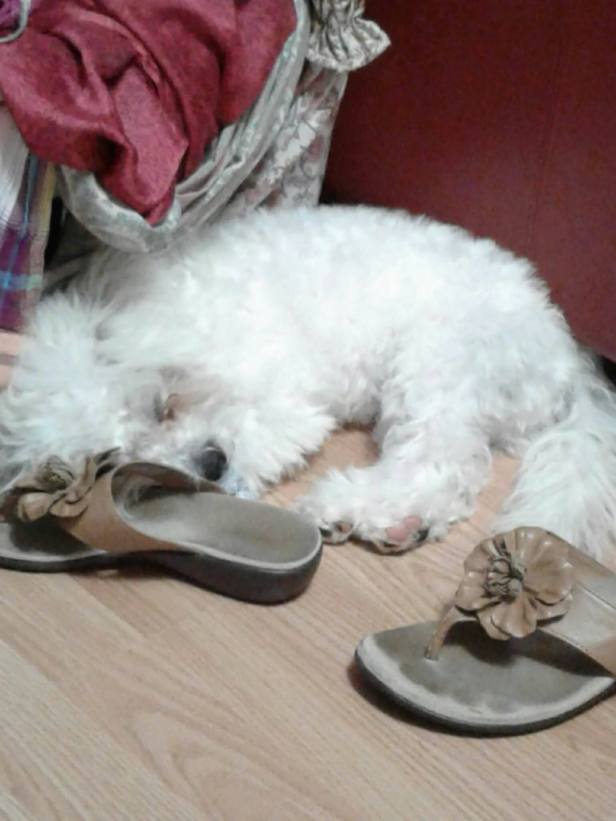 We have to stay persistent, no matter how tired we get. It takes months to fully train a puppy and one has to be willing to adapt and give up on their own ideals (your house will not be kept clean so get used to it, and yes there will be accidents for a while.) Just like a baby, toddler and young child, you have to keep “reminding” the puppy of the rules. And in the process of being persistent we need to stick with the rules ourselves: Always taking the puppy out after waking up from his nap,  never giving him/her human food, always feeding him/her the same amount of food (according to weight and age), never allowing them to chew on shoes as toys or napkins, or furniture…and so on.

All this will eventually be followed by rewards, the reward of having a well-trained puppy, because ultimately we have hope that the puppy will get it. And then we will not only find fulfillment in our accomplishment, but we have formed a bond with this warm, fuzzy licking furry friend. Hope keeps our spirits up and our energy afloat. It reminds us that the best is yet to come. With that thought we can be patient and persistent and consistent in how we address situations that seem overwhelming, or just down right agonizing. Hope is not only what we need as human beings but as Christians, as workers, as parents, as spouses and more. It is the fuel that keeps us going.

Now that Mikko has learned to sleep through the night, he has even rewarded us by not asking to go out at 5 AM for the past 4 nights. Even better: He has let us sleep through part of the morning on our last 2 off days. (We had to actually wake him up at 7:30 & 8 AM to go outside) YAY!! Another unique puppy trained! Now if only he can go through 4 more weeks of “No-accident” days and I can place my rug back in the living room. For now, Mikko just adds that extra uniqueness to our lives…my life…that keeps making it oh, so unique.  So this morning I woke up late with a lick on my face (Thanks for the wake-up Mikko), sure beats the howling at 2… 3… 4… and 5 am…

Search for Something Unique